Overnight Camel Trekking in the Sahara

A visit to the Sahara Desert was on the top of my list while in Morocco, so I booked a 3-day tour to see it after my time in Marrakech.

I don’t usually like to book tours when I travel because I feel like I don’t always get an authentic feel for the places I see. But since I was traveling alone and the desert is only really accessible by car, it was the best option. My tour group had about 12 people, 3 of us being solo travelers. I was the only girl, and like usual, people seemed to be quite interested in why a girl like me would travel alone, especially in a country like Morocco. I secretly love when people seemed shocked to learn that I’m traveling by myself, and love to debunk the stigma behind it even more. A few days earlier in Marrakech, I met a super cool fellow American family on a food tour who were also intrigued by my travels. They had a hilarious 10-year-old daughter and we became instant friends. When we went our separate ways the parents said to her “See, when you grow up, you can also go on cool adventures by yourself like Anna.” This was probably one of the most heartwarming moments of my entire life.

The drive from Marrakech to the desert is loooooong. But luckily I booked a tour that made a few stops along the way, including the Atlas Mountains via the Tizi-n-Tichka pass, a quick tour of the desert oasis at Skoura, and my favorite stop: exploring the ancient Aït Benhaddou kasbah. Walking through these ruins felt both like stepping back in time and also like I was on an elaborate movie set. But then again I kind of was, as tons of movies have been filmed there﻿.

Before I go any further, I should mention an important detail to this story. This all took place in mid July and if you think it’s a bad idea to visit a desert at the peak of summer, you’re right. The average temperature during this whole tour was 43 C/110 F. Every time I left the tour van (thank god for A/C) I was overcome by a blanket of heat. I’ve never done well in high temperatures (I live in Norway after all), so it was a bit rough. Worth it, but still brutal.

Determined to go on a Safari during my time in Southern Africa, I made my way over to Chobe National Park in Botswana. I had pre-booked the cheapest safari I could find online, which happened to be a 3-day trip with two nights of camping in the park.

Being a solo traveler, I'm used to being thrown into tours with other groups. This time, it turned out, I was wrong. When I arrived at the meeting point, it was just me and three guides (two drivers, and one "intern"). I guess that is one perk about solo travel in Africa: private safaris. 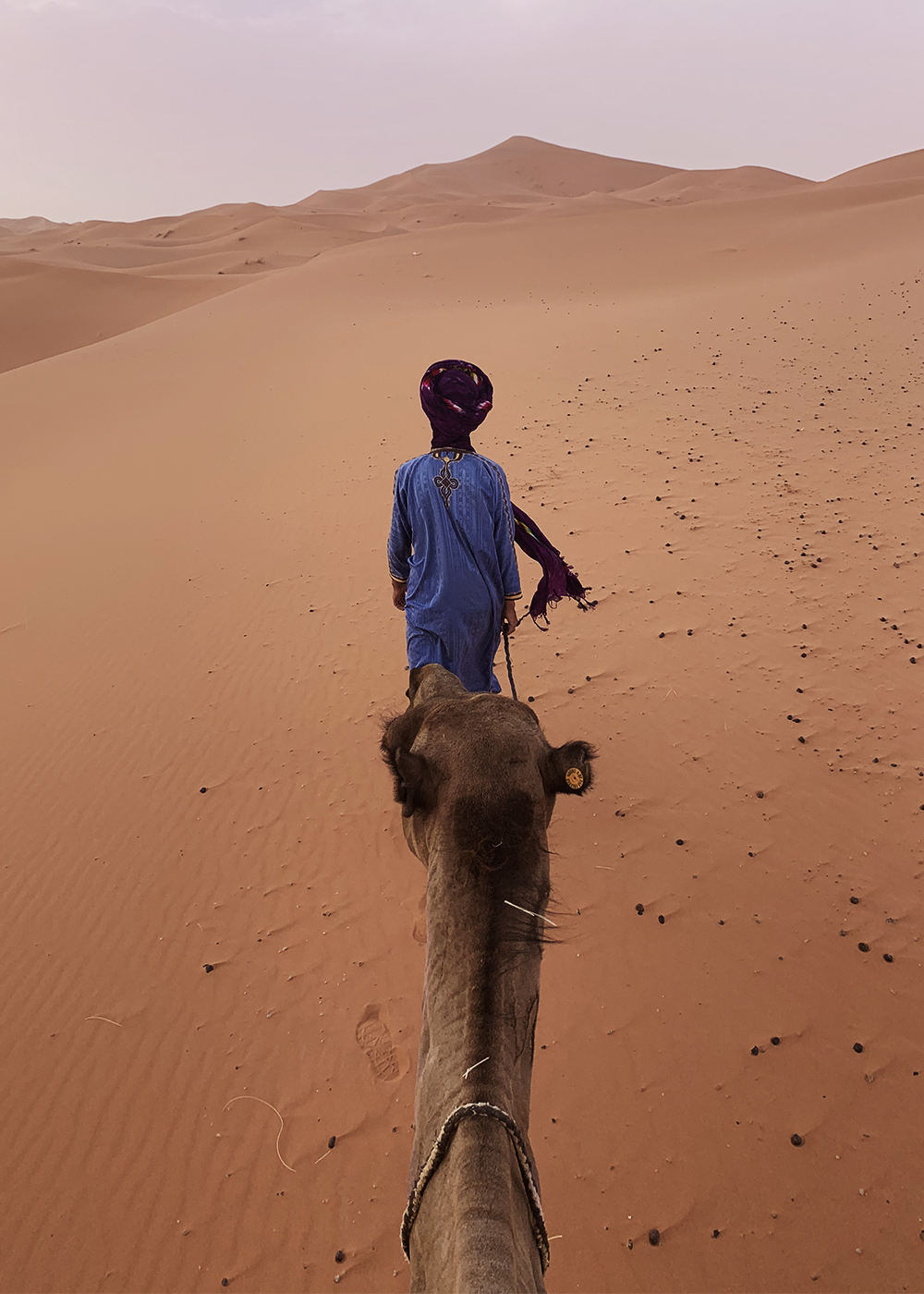 On day two of the tour we finally made it to Merzouga, a small town at the base of the Sahara Desert. Part of this tour included a camel trek to Erg Chebbi, a large sea of sand dunes. I did a similar camel trek in the Thar Desert in India 5 years prior, and had an amazing time. But to be honest, I felt a little weird about it this time around. There were a ton of other tour groups that were joining the same camel trek, and the whole thing felt a little fake—like this was some attraction at Disneyland. The other thing that made me feel weird about everything was how they treated the camels. I almost didn’t book this tour because I’m pretty against exploiting animals for the sake of tourism. And unlike my experience in India, this one really felt like they didn’t get a sh*t about the Camels. But in the end, this was the only option to see the dunes.

After gearing up in turbans to protect ourselves from the heat, we started making our way towards Erg Chebbi. If you’ve ever been on a camel you know it’s actually quite uncomfortable, especially in extreme heat. But none of that mattered once we got deeper into the dunes. I was instantly mesmerized—they went on forever. 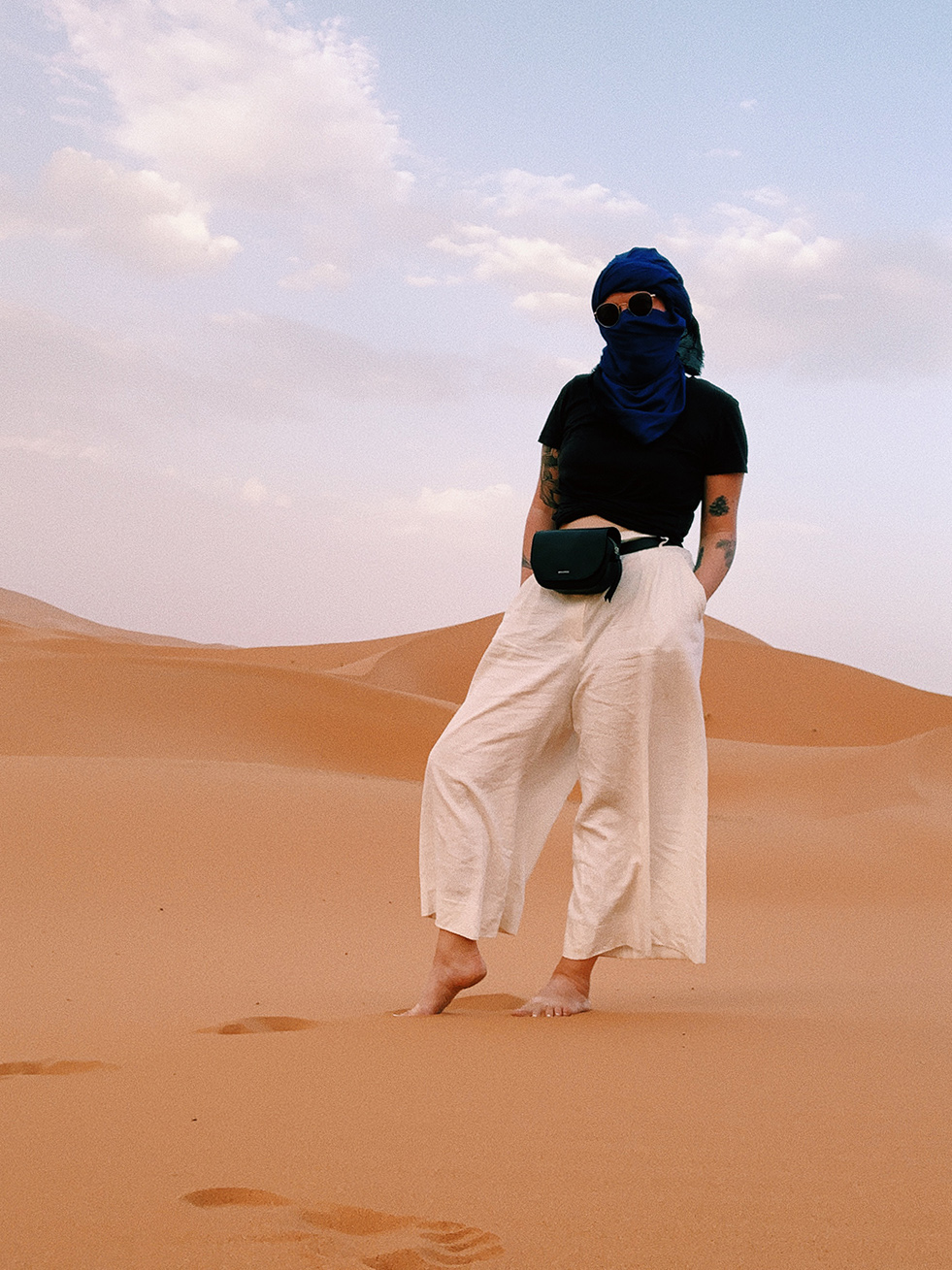 About an hour later we “parked” the camels, and I started exploring. This was my favorite part of the whole trip by far because I was able to get away from the huge crowd of tourists and found myself alone in the desert engulfed in the dunes. At that point I didn’t even notice the heat because I was too excited to be in such an incredible landscape. I know it sounds quite cheesy, but the dunes were so vast and I loved feeling so small around them.

As sunset drew near, my guides and I headed for camp. And when I say camp, I mean an empty little patch of the park that had enough space to pitch two tents and make a fire. Nothing about the camp spot was protected from the surrounding wildlife, which made me a little uneasy considering we had passed by a pride of lions only a couple hours earlier. There was also no cell service for miles. If this sounds sketchy to you, that's probably because it was—but that's part of the adventure (and probably why this tour was so cheap). 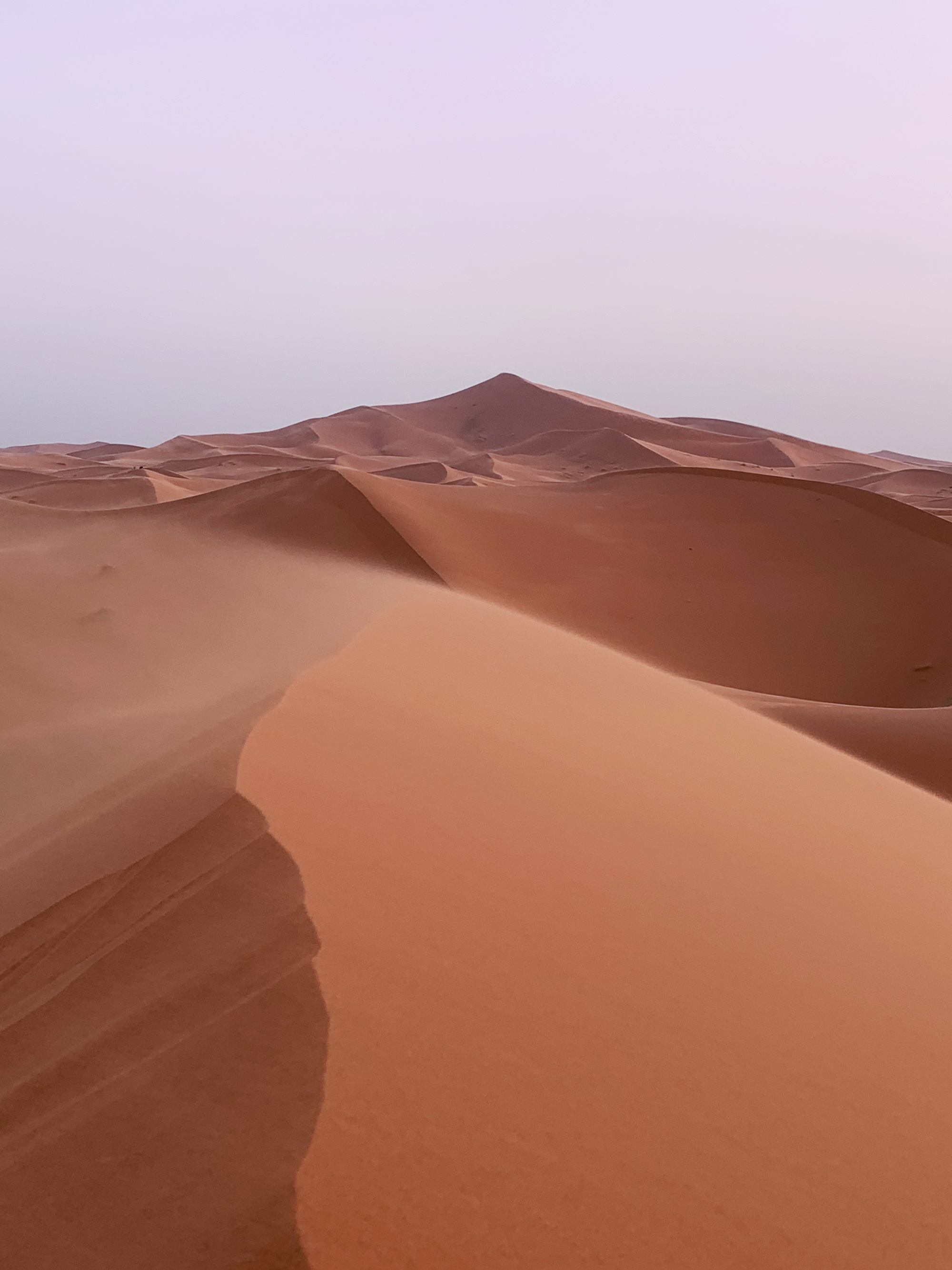 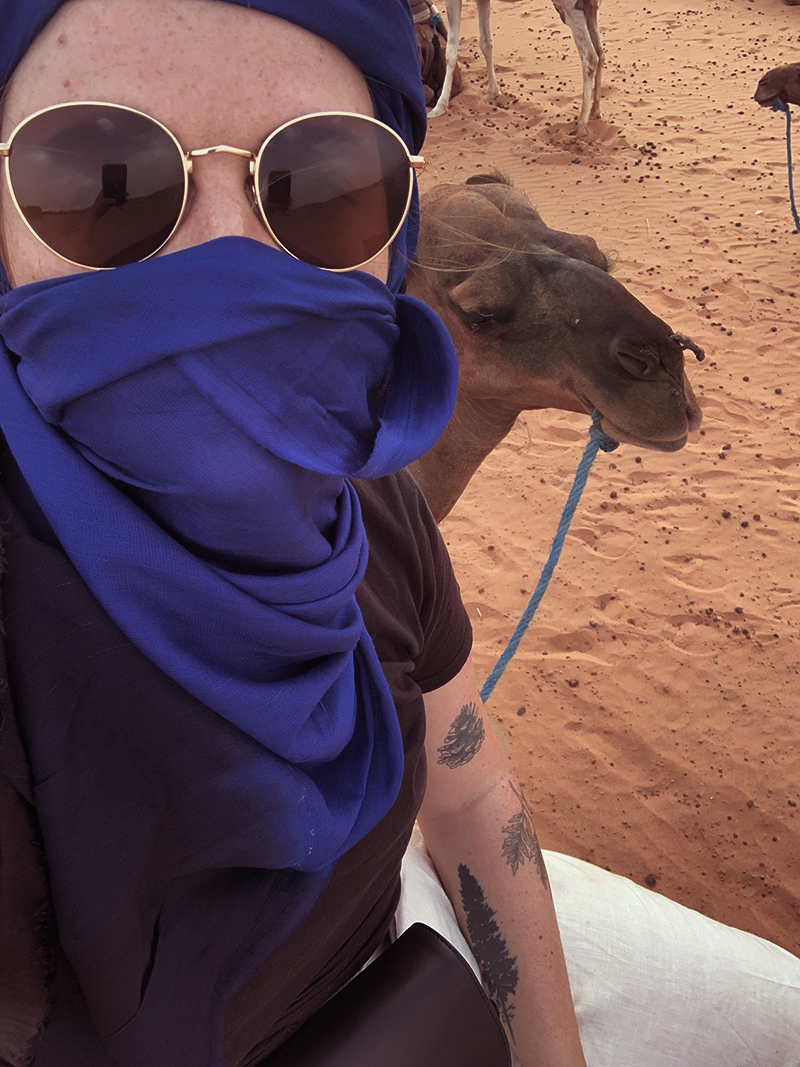 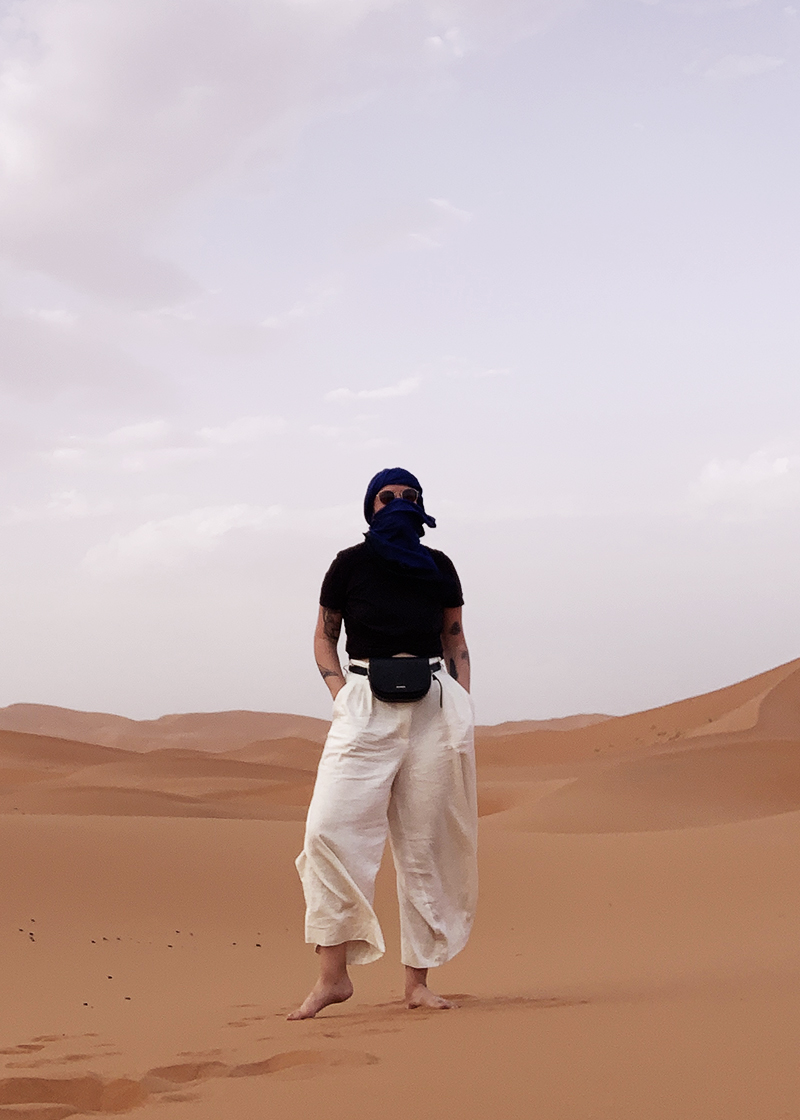 I eventually went back to the camels and we continued the trek to our camp for the night. I had also camped on my previous camel trek in India, where we slept on mattresses directly on the sand under the Milky Way (yes, it was as cool as it sounds). But this camping experience was nothing like that. The camp was basically just big ugly rows of huts created with what looked like cheap black tarps surrounded by an ugly plastic fence. I’m usually quite easy to please when it comes to stuff like this, but I was actually a little disappointed in the set up. 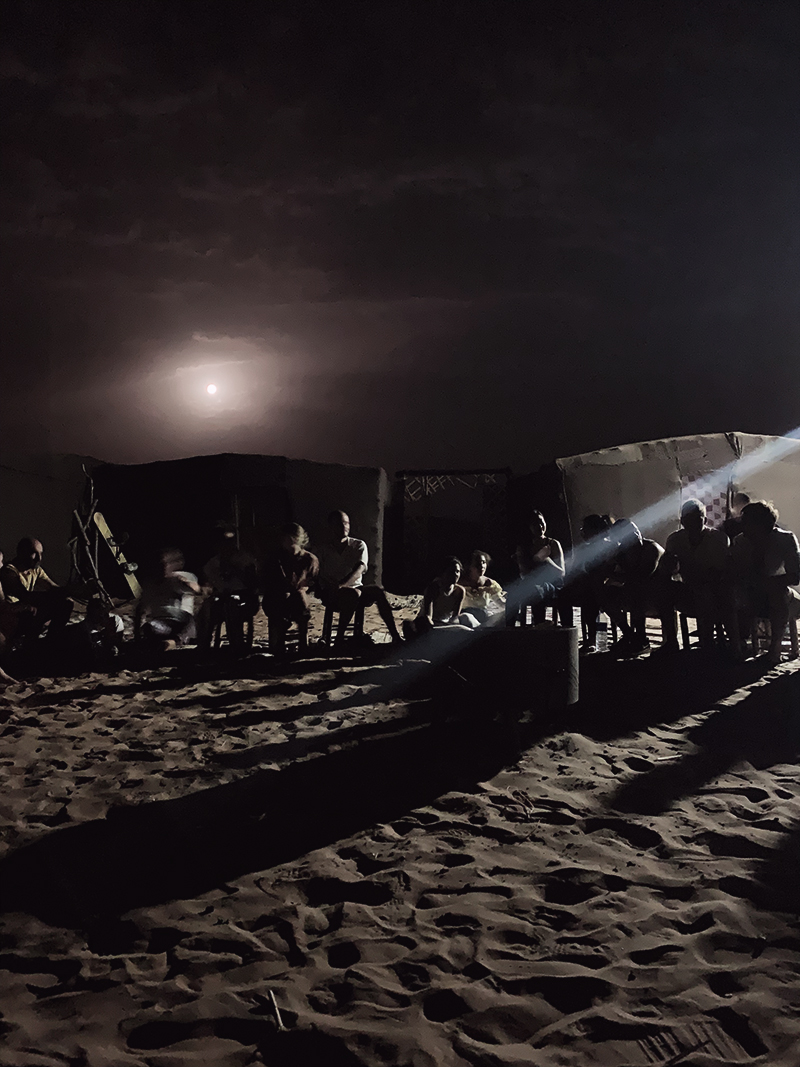 The sun started to set as soon as we got there, and we went into one of the huts for a delicious Tagine dinner. By the time dinner was done it was pitch black outside and before I knew it there was a bonfire set up in the sand. A local group of men were performing traditional Berber music around the fire, and eventually people started to dance. This also kind of felt like an act for the tourists, but I have to admit that it was actually quite fun. I danced around the fire with the two other solo travelers in my group until it was time for bed.

The day was exhausting so I was actually quite excited to get some rest in my little tarp-covered hut, but turns out the joke was on me. The temperature was still around 43 C/110 F and I was really feeling it. I don’t think I’ve ever felt so hot in my entire life. I tried to hydrate myself with my water bottle, but the water had gotten so warm it felt like it did nothing. Luckily I was in a private tent, so in an attempt to cool myself down I stripped down to my underwear and poured the remaining water from the bottle over my head. Unfortunately this just felt like a warm shower, which is definitely not what I wanted. I decided to take a trip to the “bathroom” (a toilet covered with tarp) to feel the night breeze, but as I was walking there another traveller I passed graciously warned me there was a giant snake over the toilet. Hard pass. I walked back to my hut and with no other options, laid down on the mattress and attempted to sleep. I think the entire night I maybe got an hour of actual rest. Sleeping in that kind of heat is hard.

The next morning the group gathered before sunrise to head back to Merzouga. On the way we “parked” the camels again to watch the sun rise over the dunes. This was beautiful to see, but to be honest I was a little grumpy from the lack of sleep and still feeling overheated so I didn’t enjoy it as much as I should have. I was just excited to get back to Merzouga to soak up some A/C and take a cold shower.

The rest of the tour was pretty uneventful—everyone was exhausted so our last day was spent driving the 10+ hours back to Marrakech where I was going to continue my Moroccan travels. The day was long, but the van had A/C so I was a happy, happy camper.

Click here for more pictures
from my travels in Morocco. Next story: Underwater photography in Mozambique